Please join the family of Kwamena Ocran — killed in Gaithersburg on January 8 by police officers — this coming Sunday, January 24, at 2pm at Gaithersburg City Hall. Community supporters will hear from Del. Gabriel Acevero and ACLU of Maryland Policy Director Caylin Young, student groups, and many others, and we will share poetry and music, with drumming group Farafina Kan and others. Our message: We demand justice. 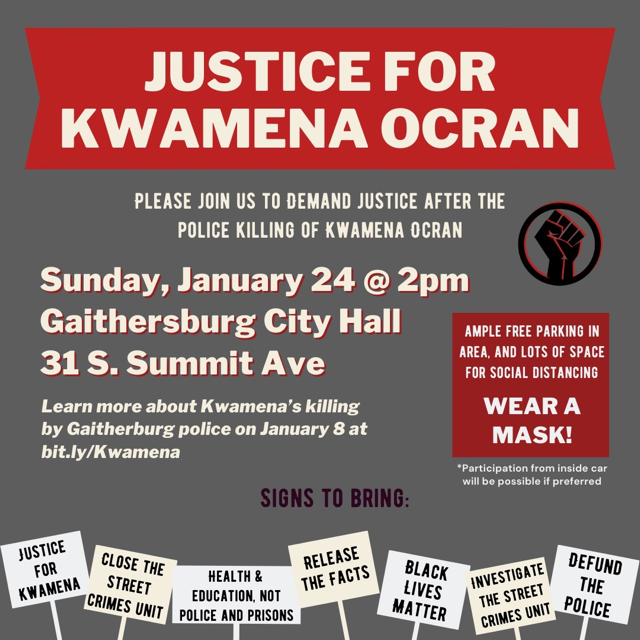 On the evening of Friday, January 8th, four Gaithersburg Police Department (GPD) Street Crimes Unit officers, in plain clothes and without body-worn cameras, approached a 24-year-old resident, Kwamena Ocran, based on reports that he was armed with a gun. Then, according to police, they identified themselves, briefly chased the resident, he displayed a gun, and at least one officer shot him. Mr Ocran died at the scene.

Within hours, GPD provided public reports that the victim “displayed a gun” — details which could have had the effect of biasing the public towards the police’s unprovable version of events. Once SSJC asked for additional answers, Chief Sroka clammed up, claiming they needed to wait for an investigation. In addition, Gaithersburg City Council has erroneously labeled the investigation by Montgomery County Police Department (MCPD) “independent,” despite the fact that the two departments work together every day. When a life is taken, police have a heightened duty to respond to the public’s need for clarity and information.

At a city council hearing held two days after the killing, where the Mayor, City Manager, Councilmembers, and Police Chief were present, the civilian members of the government expressed no specific concerns nor asked any questions about the circumstances surrounding Mr. Ocran’s death.

We make the following demands of Montgomery County Police, the Gaithersburg Police Department, and the Gaithersburg Mayor, City Manager, and City Councilmembers, reminding the city government of its oversight duty and duty to ask questions and ensure accountability, rather than accepting the police version of events:

← 400 Marylanders Sentenced To Prison As Children Should Be Eligible for Parole Review
→ Public Safety Means Staying Out of Immigration Enforcement: In Support of Maryland SB88/HB304